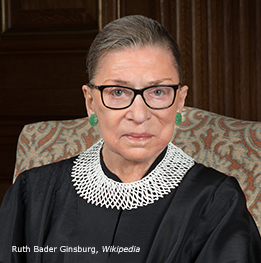 When asked by the Weekly Touch coordinators to honor women’s history month by contributing a brief article that highlights a woman of significance in my life experience, I immediately thought of one of the shining stars that has recently left this world, Ruth Bader Ginsburg.

Supreme Court Justice Ginsberg spent much of her legal career as an advocate for gender equality and women's rights, winning many arguments before the Supreme Court. She advocated as a volunteer attorney for the American Civil Liberties Union and was a member of its board of directors and one of its general counsel in the 1970s. In 1980, President Jimmy Carter appointed her to the U.S. Court of Appeals for the District of Columbia Circuit, where she served until her appointment to the Supreme Court in 1993 by President Clinton. Between O'Connor's retirement in 2006 and the appointment of Sonia Sotomayor in 2009, she was the only female justice on the Supreme Court. During that time, Ginsburg became more forceful with her dissents, notably in Ledbetter v. Goodyear Tire & Rubber Co. (2007). Ginsburg's dissenting opinion was credited with inspiring the Lilly Ledbetter Fair Pay Act which was signed into law by President Barack Obama in 2009, making it easier for employees to win pay discrimination claims.

In her early years, as Ginsberg became increasingly more involved in gender equality issues, she charted a strategic course, taking aim at specific discriminatory statutes and building on each successive victory. She chose plaintiffs carefully, at times picking male plaintiffs to demonstrate that gender discrimination was harmful to both men and women. The laws Ginsburg targeted included those that on the surface appeared beneficial to women, but in fact reinforced the notion that women needed to be dependent on men. Her strategic advocacy extended to word choice, favoring the use of "gender" instead of "sex," after her secretary suggested the word "sex" would serve as a distraction to judges. She attained a reputation as a skilled oral advocate, and her work led directly to the end of gender discrimination in many areas of the law.

In her early years Justice Ginsberg experienced many challenges due to her gender. She was the only woman in her class at law school and was rejected more than once for internship opportunities. Yet, she did not become so discouraged that she gave up her dream. Instead, she worked tirelessly, well into her 80s, for gender justice. RBG’s life work will live on to benefit the US society for many years.

A phrase from the Book of Deuteronomy hung framed on the wall of Ginsburg’s Supreme court chamber: “Justice, justice you shall pursue.” This phrase from the Hebrew Bible, “Tzedek, tzedek tirdof,” summed up perfectly her calling as jurist and a Jew.